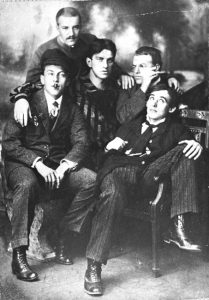 In addition to this feature the BR asked me to interview Andreas Ammer and FM Einheit about the performance, their interpretation of Avraamov’s concept and the different mixes of Avraamov’s “Symphony of Sirens”. Our talk entitled “Hupenkonzert” (“Concert of signal-horns”) is still available as podcast. And at the artmix.galerie of BR you also can find the podcast of my interview with Klemens Gruber, an expert on the Russian avant-garde and professor for intermediality at the University of Vienna. With Gruber I spoke about the ongoing relevance of the artistic experiments of the Russian avant-gardists and about their nephews and nieces in the second half of the 20th century, like Yoko Ono, Radio Alice and Alexander Kluge. Last but not least at the artmix.galerie you also can find the lecture “Music made out of Noise, Light and Paper” of the Russian composer, artist and researcher Andrey Smirnov about his research on the experiments in sound and electronic music in early 20th century Russia.

My interest in the Russian avant-garde is strongly related to the research for my PhD project about noise and the epistemology of radio art. Thanks to the great opportunity to talk to such experts like Zielinski, Sasse and Gruber I learned so much, e.g. about the avant-gardists fascination for the machine and new media, about artistic research, alienation and “art as device” (Victor Shklovsky) and first and foremost about why we still should study these intriguing works of art like Velimir Khlebnikov’s poetry, Kazimir Malevich’s famous parinting “Black Square”, Dziga Vertov’s movies, the  fotos and designs of Alexander Rodchenko and El Lissitzky, the literature of Vladimir Mayakowsky, the plays of Sergei Tretjakov, the theoretical texts of the Russian formalists like Viktor Shklovsky and Roman Jakobson, etc. etc.. 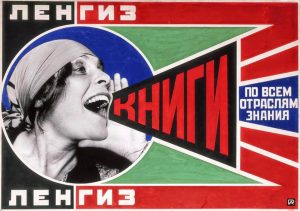 Poster by Alexander Rodchenko from 1924, advertisement for „books in all fields of knowledge“

I hope I managed to share a least a bit of these insights in my radio feature. The rest will become part of my book.

If you understand German and have some spare time to delve into probably the most exciting and intense times of 20th century political, cultural and art history – I can guarantee you some hours of intellectually stimulating listening pleasure: A trip back in time, when art still wanted to be so much more than just entertainment and a “safe investment”.

In case you also read German and would like to delve even further into the topic, I can recommend these fine books to you (also some English ones):