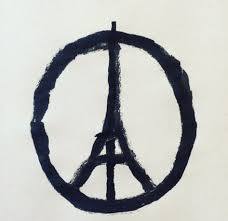 The only thing it leads to is fear: The poison that has got the potential to rule ourselves totally and cripple our hearts. Or as the Danish writer and sound artists Morten Søndergaard wrote:

Morten Søndergaard’s statement was part of his warmhearted comment to the touching posting of a friend, who worte yesterday on Facebook:

„I am an immigrant to the UK. I grew up in the 1990s in a climate of fear as I experienced a wave of terrorism in the Middle East that deeply influenced my family and myself. I never became complacent, but living in Europe for the past 13 years gave me the illusion that I am far away from the fear. That doesn’t seem to be the case any more. It feels like the beginning of a new age where it is important to be vigilant and at the same time resist media enforced polarisation.“

And refering to Morten’s conclusion the friend added:

„(…) fear depends on the extent one is affected by the conflict, how close the tragedy and its consequences touch you and those you love.“

Sitting in the beautiful landscape of the nowadays thankfully so peaceful border triangle of France, Switzerland and Germany, wirting only theoretically about noise and catastrophes, within my PhD on radio art, and not having lost any relative or friend due to terror attacks yet, it is of course easy for me to advise others: Don’t be afraid.

However, I think the biggest threat we have to deal with in our times is not terrorism. It seems more like Patti Smith said after the Charlie Hebdo shooting in January: 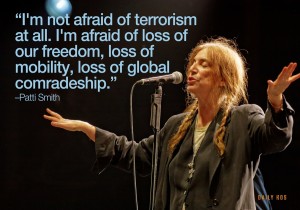 After this year’s attacks in Paris, on Charlie Hebdo, the Bataclan and in the cafés of the French capital, I think the most important thing is that we try to go on celebrating life, with the music of the Eagles of Death Metall, Pattie Smith, John Lennon and all the other passionate musicians out there. We should listen to the conselation of their music. And we have to go on loving and dreaming, more than ever, just like this clip demonstrates:

What I find so poignant about this video is not only the symbolic meaning of the music but also to see how many people surrounded the pianist and filmed him or took a picture. Within hours the video went viral and since then has been watched thousands and thousands of times all over the world. Of course this brief moment in reality and its preservation on the internet is no solution regarding the crimial terror, its networks and its religious foundation at the beginning of the 21st century. But for me it is at this moment the only acceptable answer to this religiously disguised insanity that took place in Paris.

Even though Lennon once sang:

I don’t think that the tragedies we are witnessing are the fault of religions. Because first and foremost – this is not a religion:

The only things we need, today maybe more than ever, are awareness, love and acceptance, qualities that are taught by religions for millennia, by Islam as well as by Judaism and Christianity and so many other spiritual paths. But still love seems to be the hardest challenge for so many of us. Fortunatelly there are exceptional people who stuggle to hold on to love, what ever happens to them. One of them is Antoine Leiris who wrote on Facebook after this wife got killed in the awful attacks in Paris :

Whatever the future will bring: If we succumb to fear and hatred, if we let them cripple our hearts, the terrorists will have won and we will have lost. The only answer is love and will always win, as Hamid Sulmaiman and Aurelie Ruby showed to the world:

The answer is not hatred and amarment. And it may not be fear. Don’t be afraid. Just like the people of Paris showed to the world in solidarity right after the Charlie Hebdo massacre. May they and may we never loose or forget the courage to trust and love.

I just found this quote by Hannah Arendt in my notes: Something we should keep in mind. Especially in times of a Turkish president Erdogan and an American wanna-be-president Donald Trump:

„The moment we no longer have a free press, anything can happen. What makes it possible for a totalitarian or any other dictatorship to rule is that people are not informed; how can you have an opinion if you are not informed? If everybody always lies to you, the consequence is not that you believe the lies, but rather that nobody believes anything any longer. This is because lies, by their very nature, have to be changed, and a lying government has constantly to rewrite its own history. On the receiving end you get not only one lie—a lie which you could go on for the rest of your days—but you get a great number of lies, depending on how the political wind blows. And a people that no longer can believe anything cannot make up its mind. It is deprived not only of its capacity to act but also of its capacity to think and to judge. And with such a people you can then do what you please.“