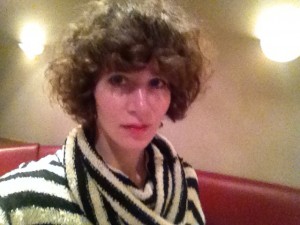 Although her Riot grrrl years are long over and she is already somewhat of an international celebrity, Miranda July still holds on to the DIY attitude. As such she has become a sheer wonder of creativity. Only 41 years old, she already recorded two punk rock albums and wrote and directed the two feature films Me and You and Everyone We Know and The Future, in which she also starred. Miranda makes short films, writes short stories and creates sculptures like Eleven Heavy Things, which were commissioned for the 53rd Venice Biennale in 2009. She is famous for her performances like her latest one New Society and for her interactive new media art projects like the websites Learning To Love You More, We Think Alone and the app Somebody. When she decided to take up the challenge of writing a novel, in her practical way she combined this long-term project with her first pregnancy. In 2012 her son was born and by the beginning of 2015 she published her first novel The First Bad Man.

When the German translation came out in August, I read it and wrote a review for the radio. And now that Miranda came to Switzerland and Germany for promoting her novel, I had the great pleasure to meet her in Zurich for Zündfunk.

During the interview as well as at the reading at night, Miranda July spoke a few times about what being creative means to her and how she manages her creativity. For example at the reading she was asked by a fan from the audience if she could tell a little bit about her writing process. So she told us that she at first installed Freedom on her computer, a software that blocks distractions across all your devices: „Because often I will answer a whole bunch of emails. That makes me an idiot“. Then she meditates, „from anywhere like 14 seconds up to ten minutes“. And finally she starts to write:

At the beginning of a book it’s really hard, like your whole job is just not get up from that chair and keep moving your fingers. It didn’t feel creative to me. I would feel like a robot, like duh, duh, duh, you know? And it was bad writing. It was just like get through it. The story, write it, even if it’s bad. And once I had a draft, and by then it was already eight months, I was like warmed up. Then it’s a little easier. Plus: I had a book. It’s here, you know, this robot worte it for me! But: It exists and I am making it better everyday. And that part was a lot more enjoyable to me. I liked the kind of cosy nest of my thing, and knowing that I didn’t have to come up with kind of a new idea. With a short story you have to come up with a whole new idea. With a novel you just add little things here and there.

During the interview we also spoke about different aspects of creativity. Miranda July shared wonderful insights with me, which I would like to share with you here, too.

AM: Miranda, when I look at the list of all these art projects you realized already, I wonder: What’s your secret of being so incredibly creative? Why are there so many people all over the world who admire you but don’t dare to make art themselves?

MJ: Well I think that most of the time there’s a pretty good reason not to make art: That you don’t have a lot of time. That you are genuinely exhausted. That you are sick. You have other people to care for. You are in school. And these are situations that we are all in, and we are all suffering from them. And for that reason those are the situations you have to make art from. You have to tell us what it’s like to be that exhausted, because that’s the only thing that is gonna speak to us: other exhausted people. So, far from being the reason why you can’t make art, it is what you have, it’s your gold! Your place that you are coming from. And the more specific it is, to you and to your plate, the more powerful it will be to me and my plate. I’ll see that, I’ll feel that and that truth will bring my truth alive, and I’ll think: Oh, I absolutely must, I must say what it’s like for me. And I think we do all affect each other, and I am certainly not working in a vacuum. So when I sat down to write, often it was after reading someone else’s thing or listening to some music. Sadly I just have to say:  It is hard. And there will be no perfect time to make your work. Unfortunatelly it is now.

AM: Often I find your stories and the way you describe your characters amazingly non-judgemental. Especially in your first novel The First Bad Man there are so many twisted characters: There is the protagonist, the uptight Cheryl, a neurotic wallflower in her early 40s, who has a crush on Philipp, a much older man in his 60s. She is convinced that he is a soulmate she has known since the Stone Age and that they are meant for each other. But Philipp desires a 16-year-old girl and asks Cheryl to give him her blessing for having sex with the teenager. Meanwhile the daughter of Cheryl’s bosses, the 20 year old blonde bombshell Clee, moves in with Cheryl, against her will. Clee is gorgeous, but she doesn’t shower, has got the worst athlete’s foot and is massively aggressive. But still: the way you describe all of them is very touching and non-judgemental. Is  your writing inspired by Buddhism?

MJ: Yeah. It’s not that I am a super-buddhist. Super-Buddhist! That’s probably not a thing in Buddhism (laughs). But the place I am when I am writing is certainly the least judgemental I can get. But the second I put my pen down and step away from the computer, I am just a horrible judge, horribly critical, first and foremost of myself, but it really extends all over the place. Which is why I desperately need this kind of state of grace.

AM: What does that mean? How does it work, this state of grace?

AM: What acutally did the expirience of becoming a mother mean to you? How did it influence your creativity?

MJ: Right, I mean I had been very worried about what would happen. It’s like going to another planet, becoming a mother. You just don’t know! And what I found was I was sort of thrust into the marrow of life, like death is never far from my thoughts, death, and illness, and loss. It just comes with having a child. I was thinking about those things before but just kind of scrambling on them, I did not really have the guts to go into it. And now it’s all right there and it’s completely overwhelming. In fact just finding the words for these feelings is gonna take me a while. And sure there is not enough time for it. I am suddly a waitress and a housecleaner half the time, too. It’s just not purely romantic. But I think for me it’s almost like when you are a teenager, and you are certain that aliens might land and everyone is connected and you have this kind of electric crackling sense of reality, and you can’t help but write poetry or fall in love with someone you just saw on the street. It’s like that feeling again, but coupled with all this years of experience, a massive amount of responsibility and all this weight. It’s the opposite of being a teenager. That’s kind of great, I mean you are ready to make work, you know your are ready to sit down and do what it takes you and it’s a relief frankly from a lot of the tedium of having a child, too. So I found it great. Just now my son is 3,5 and I am just now finishing the insane amount of projects I dreamt of while I was bouncing him to sleep: This book, a performance called New Society, that I just finished in NY and LA. And now I am kind of beginning a new phase in a way.

AM: Today in the art world and especially in the realm of directors there are still very few women who are successful in the sense of acknowledged. What is it like for you to be a female artist?

MJ: Well, a female artist. To me a female artist is an artist. I sort of feel like although we are a culture having trouble giving women power, we raise women to be artists, we raise them to have feelings, to cry, to be in touch with the body, with the earth. All these female things are actually quite handy for making art. You don’t have to work hard to get into the sticky depth of life, which is the artist’s job. So I think this is why there are so many great women artists, and writers and there should be directors. It only get’s complicated if those people are good in what they do but have no power. That’s not okay. But I think it’s a very natural state for a woman to make art. I mean it’s like you are not recognized for it, but you are doing it all the time . 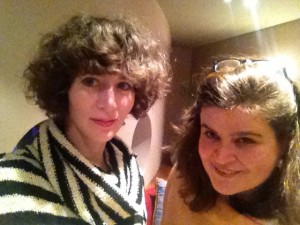