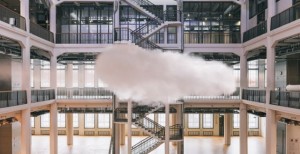 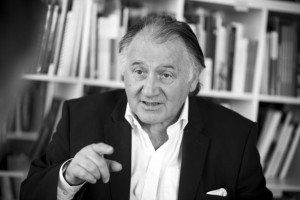 Before the festival GLOBALE actually started, from 19th to 21st of June the Tribunal – A Trial Against the Transgressions of the 20th Century took place at ZKM. I reported about this special kind of political art happening for the Kutlurjournal of Bayern2/BR (Radio). 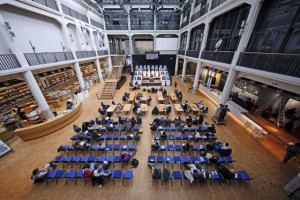 In my radio feature I focused on the crucial role that art and artists played for the examination of the abyss of the 20th century with all its totalitarism and genozides. With Norman Naimark, Professor of Eastern European Studies at Standford University (US), I spoke about Franz Kafka’s The Trial and about the importance of the literary investigations of the poet Robert Conquest on Stalinism long before academia dared to look critically at it. With Roger Berkowitz, Director of the Hannah Arendt Center at Bard College in New York (US), I spoke about the political philosopher Hannah Arendt and her critic of „joiners“ like Adolf Eichmann, her self-concept as a „conscious pariah“ and the importance of being a „Selbstdenker“ (self thinker). And with the German filmmaker Lutz Dammbeck I discussed his latest, again quite controversial essay film Overgames and his investigations on the relationship of psychotherapy, TV game shows and the politcal program of Reeducation especially of the US-Americans after World War II in Germany.

It is true: It were mostely white (elderly) men, who presented their accusations. But where are nowadays women like Hannah Arendt who dare to actively participate in crucial politcal debates of our allegedly times of The End of History? One of them certainly is Saskia Sassen, professor for Sociology at Columbia University in New York (US). According to Sassen’s speech one of the main challenges of the 21st century – besides environmental damage and migration – is the relationship of information technology and unregulated finance:

„What ist the steam engine of your epoque? In other words: That element, that form of power, that complex tool, that is present directly and indirectly in so many domains? And another way of putting it is: That what can make a new ordering? One more simple way to put it: What is in? And what is out? Out of life, out of properity, out of habitat. Out. So when I ask this question, the common answer tends to be: Information technology. Information technology, the steam machine of our epoque – I say no. It is the infrastructue of our epoque. It is not the steam engine. Infrastructure is something necessary but indetermined. It can be used in many different ways, for good and for bad. I think that the steam engine of our epoche, which has produced some good things and has produced some very bad things, is – finance.“

Unregulated finance, as Saskia Sassen stated, is not only in charge of the wars in the world and the massive migration movement we are facing right now in the Mediterranean. Finance is also responsible for the millions of forgotten people in the US, who became homeless after the housing crisis in 2008 and are living in tents and camps since then.

A similar position was presented by italian philosopher Antonio Negri, although of course arguing from a much more European marxist background.

While at the same week-end in Berlin the March of the Determined organized by the Center for Political Beauty took place – the attempt to give migrants, who died while trying to come to Europe across the Mediterranean, their sepulture in the center of the German capital – migration  was also a key topic at ZKM, but more regarding the expulsions of the 20th century then the current ones of the early 21st century. After the speech of Jan M. Piskorski, Professor for History at the University of Szczecin (Poland), Bazon Brock, famous German art scholar, reminded the audience that we won’t learn from history as long as we are focusing on wars and heroes. What has to be praised and defended are the few moments and short periods of peace and staiblity human kind has expirienced in history – an as controversial as wonderful thought of Bazon Brock, which btw. art scholar Wolfgang Ullrich also elaborates and interprets very nicely in his highly recommendable essay in the latest book on Bazon Brock.

I sincerely wish to thank all the organizers, speakers and interviewees for making this event possible, for taking their time and sharing their thoughts.