The philosophical radio magazine „Sein und Streit“ asked me to visit for them the hut of Martin Heidegger in Todtnauberg, a climatic spa approximately 60 minutes by car from Basel in the Black Forest. Of course I knew about this famous hut, which Heidegger acquired in the early 1920s and where he concentrated on developing his fundamental ontology.

Heidegger’s hut above Todtnauberg and the famous well with the star-die on top. (August 2016)

Being strongly influenced by Adorno’s aesthetics, I always was reluctant to engage in a deeper examination of  the wirtings of Heidegger, who, since 1933, collaborated for his career with the Nazis and who held on for the rest of his life to an economics based anti-Semitism. 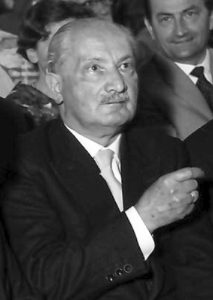 Nevertheless Heidegger’s philosophy is important for my own interest in thinking about the reationship of mankind and technology, about the „Gestell“, as he called it in his terminology, and for my severe interest in the significance of poetry. So the request from the radio magazine was very welcome as an opportunity and a challenge to overcome my own resistances. Yet being a bit intimidated by Heidegger’s problematic fame, I asked my longtime, much valued teacher Clemens Pornschlegel as a close reader of Heidegger for 40 years if he would like to accompany me. 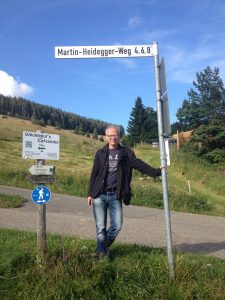 Clemens Pornschlegel after we did the whole Heidegger tour. (August 2016)

To my delight he was also fond of this idea and so we met in Todtnauberg and talked about Heidegger, why he might have chosen this hut above the village for his domicile for thinking and about a very special encounter of Heidegger and the Jewish poet Paul Celan, whom Heidegger had invited to visit him there in 1967. Afterwards Paul Celan wrote a very poignant poem about his meaningful encounter with the philosopher, who never uttered any regrets regarding his engagement with the Nazis. The title of Celan’s poem: 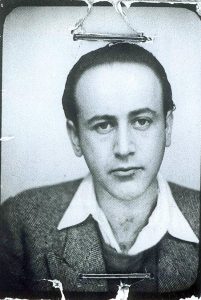 This confrontation of the probably most famous German philosopher Martin Heidegger and the most important, German writing poet Paul Celan not only reflects the history of 20th century German intellect in the famous „nutshell“. It certainly also calls for a deeper inquiry on my side, but this will have to wait until I will have finished my PhD. For now you can read or listen to my short report in German about Heidegger’s hut in Todtnauberg here. 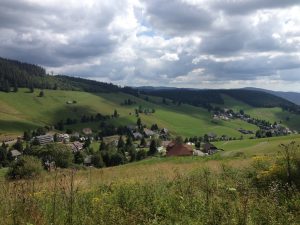 Recommendations for further readings in German: